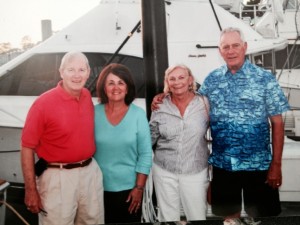 Robert Brown ’68 was first introduced to Sigma Chi during a visit to the Grounds his senior year of high school. His friend, J.W. Stalling ’66, first opened the door to the Sigma Chi Brotherhood that would provide Rob with a sense of family and lifelong friendships.

Rob was seventeen when he graduated from high school, so he was one of the younger members in the Chapter House. He discovered a newfound sense of identity within the Fraternity. “Growing up, my identity was that of a son of my mother and father. At U.Va., being a Sigma Chi was who I was… being that person was the most important thing to me.” He explained, “I dated a girl for a while in school that was a year older than me. After she graduated, she wrote a letter to me addressed to Sigma Pi, not Sigma Chi. When I didn’t respond, I figured if she didn’t know me well enough to know my Fraternity Greek letters, she wasn’t worth my time.”

During his fourth year, Rob held the position of annotator for the Chapter. He also had the opportunity to represent Psi Chapter at the national convention during the summer before his fourth year. He earned a B.A. in economics and did two years in the ROTC program, graduating as a second lieutenant in the U.S. Army.

After graduation from U.Va., Rob served in the Army for two years, one in Vietnam. Rob then attended the College of William and Mary to obtain his MBA and began a career in commercial real estate. After five years working for a firm in southeast Virginia, Rob started his own business. Since 1977, Rob has been the president and owner of Robert Brown and Associates Inc. Today the company has six employees, three of which are his sons.

Rob feels that his career was impacted by his involvement in Sigma Chi by providing him with opportunities to build relationships and his reputation. “As I look back on my career, there is no question but that the relationships I built and the reputation I was able to earn being part of Sigma Chi is part of who I was and who I am today.” He recalls a specific instance when his Sigma Chi membership came to his aid when developing a property in Suffolk, where Steve Herbert ’68 was city manager. “When we went to buy and develop the property, it didn’t hurt that my Fraternity Brother was the city manager. My name and reputation had preceded me.”

Some of Rob’s favorite memories of his time in the Chapter are dinners at the Chapter House and the annual social events, including the Sweetheart of Sigma Chi weekend. He hopes that the current Actives will invest their time in the Brotherhood. “The key is to build relationships with people and try to appreciate that you have the opportunity to create lifelong friendships,” Rob said.

Rob stays in touch with several members of Psi Chapter from his era and makes an effort to attend Alumni events in the area. He encourages Brothers to make the effort to reconnect “because you’ll forever cherish the opportunity to continue relationships with some quality people.”

Rob lives in Poquoson, Virginia, with his wife, Debbie. The couple has three sons and five grandchildren. Rob is active in his community and holds leadership positions in his church and the local YMCA. He serves as president of the real estate foundation for Christopher Newport University and is involved with regional economic development for the Hampton Roads Estate Development Alliance. He enjoys deep sea fishing on his boat, Just Right. Contact Rob at rob@rbainc.biz.